Borehamwood is a town in southern Hertfordshire. It is a commuter town near Watford and London, situated 12 miles from Charing Cross and is within the civil parish of Elstree and Borehamwood and the London commuter belt. The town is most well known for its film and TV studios, commonly known as Elstree Studios.

PESTUK have been in business since 1985, starting in Reading, Berkshire we have slowly expanded to be able to cover Berkshire, Oxfordshire, Hampshire, Surrey and West London. All of our technicians are fully trained and fully insured with yearly courses taken so as to stay at the forefront of pest control in the UK with knowledge of new laws and new technology for dealing with all your pest issues.

A common pest problem that we deal with are fleas. The first common sign of a problem are bites, generally concentrated on the lower leg areas. Bites can occur on other parts of the body, on children this is often more evenly distributed as they are nearer the ground and more likely to be playing or lying on the carpeted areas. Different people react in different ways to bites. Some experience itching, swelling, some do not. Some people will react immediately to bites others it may take several hours before they become noticeable.

You may see fleas in the carpet or on your pet if you have one. The Flea infestation may have been caused by your own animals (if you have any), by a visiting animal, by previous occupants animals, or occasionally brought in by humans on their clothes. The Fleas live in the carpets and leave the carpets only to feed on the host animal, (this is usually a cat or dog). If the host animal is not available then they will feed on humans, often preferring women and children to men. They will move on to beds & clothing but soon return to the carpet. 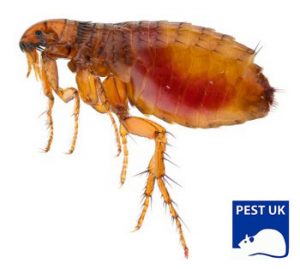 Flea treatments will not work unless preparation is carried out. Hygiene is paramount. The floor area of the house should be vacuumed and the whole floor area will be sprayed with a residual insecticide, particular attention should be paid to the edges of carpets at the floor/wall join, underneath static furniture, under beds & the resting and sleeping areas of any pets. Upholstered furniture should be vacuumed taking care to treat the space under the cushions of chairs and settees where debris becomes collected. If available, the bedding of the cat or dog should be replaced or washed. Baskets must also be treated thoroughly. The vacuum bag must be removed after this & placed in an outside bin. The pet should be treated with a formulation to treat fleas on an animal.

The technician will use a residual insecticide spray to treat the carpeted surfaces and sometimes furniture. they will use on of these insecticides: Effect Microtech CS’ Ficam W which contains 80% Bendiocarb w/w or K-Othrine which contains Deltamethrin. A powder might be used called Ficam D. This contains an insecticide in a dust formulation at 1% w/w Bendiocarb. All insecticides used are biodegradable, almost odourless, non tainting & they do not corrode or stain. They are not highly toxic towards mammals but are extremely so to all forms of crawling and flying public health pests.

The BPCA promotes the highest standards of professional conduct and work within our industry. They will only allow organisations that prove their competence and skill to join as members. A directory of member companies is available on their website. You can also call them to get advice directly if you wish