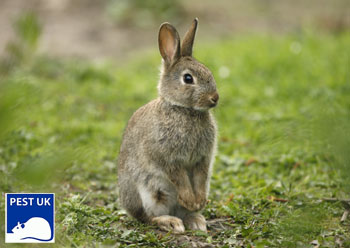 Why Should Rabbits Be Treated?

Rabbits cause damage to lawns & plants by eating & scratching. They carry fleas and can transmit diseases to domestic rabbits. Landowners are obliged by law to control rabbits on their land. An Order was made under Section One of the Pests Act 1954 by which England and Wales (except for the City of London, the Isles of Scilly and Skokholm Island) were declared a Rabbit Clearance Area. In this area, every occupier of land is responsible for destroying wild rabbits on his/her land or for taking steps to prevent them causing damage. This is a continuing obligation.

Locating the holes is a time consuming process and may be missed by the technicians especially if covered in vegetation. Vegetation clearance makes locating the holes easier and leaves less cover for the rabbits to hide in. This makes them more likely to use the burrows as cover making them susceptible to the gas treatment. Marking the holes with bamboo canes is a good idea. Just before treatment making a noise, letting a dog loose or any general disturbance will encourage rabbits to go into the burrows before gassing starts.

Gassing is the most cost effective method of control that shows immediate results. The rabbit warren will be gassed by putting fumigation tablets of *Talunex made from PHOSTOXIN which contains the active ingredient ALUMINUM PHOSPHIDE in the form of (56%w/w). The MAFF No. for this product is 01775. This treatment is most effective in the Winter months when the earth is damper (*Phostoxin needs moisture to release Aluminum Phosphide gas that kills the rabbits), and there is less vegetation for them to hide in. In the late Spring, Summer and early Autumn rabbits will often not use the warrens at all but lay up on the surface concealed in bushes etc. The treatment is guaranteed to reduce the rabbit population although by how much and for how long cannot be guaranteed. As a guide the population is usually decreased by between 50% & 70% depending on individual circumstances.
The movement of rabbits from one area to another is easier during these periods so warrens treated at this time are liable to reoccupation fairly quickly although much depends on individual circumstances.

Aluminum Phosphide (Talunex) is a deadly poison so the warrens should not be disturbed for at least 24 hours after treatment. Dogs and other animals should be kept away. Keep vegetation short to reduce cover. Fencing may only be the long term solution to deal with rabbits.

Rabbit trapping using live catch traps can be an effective way to control rabbits either as an addition to other forms of control such as gassing and trapping or just on it’s own. Often preferred in the Summer when gassing is less effective or where the rabbits are living in areas that cannot be gassed but traveling into a garden or field to feed. Cage traps are laid and baited. The traps must be looked at daily & then if any caught PEST UK must be phoned. The traps must be ‘unset’ if they can’t be inspected during the 24 hour period.

The price for a live catch trapping is £240.00 + VAT which involves 4 visits (including setup and pick up).

In some cases shooting may be an option. usually done best at dusk or early in the morning.

Rabbit treatments are not guaranteed although in most cases any treatment will reduce the level of infestation. How much depends on individual circumstances and the type of control implemented.

European Rabbit (Oryctolagus Cuniculus)
The ancestor of all domestic rabbits, the European rabbit has become so successful that it is considered a pest in many areas.

Rabbits are smaller and less gangly than hares, and have shorter ears. The tips of the ears are brown, and the upper surface of the tail is dark brown. The characteristic white flash on the underside of the tail can be seen when the animal is fleeing. The body fur is brown/grey.

Rabbits are widespread in western Europe, including the Balearic Islands, Corsica, Sardinia, Sicily and the British Isles. They are also found in North Africa and have been introduced to Australia, New Zealand and North and South America.

They live on heath land, open meadow, grassland, woodland, the fringes of agricultural land and dry sandy soil, including sand dunes, but they avoid coniferous forests.

Rabbits eat the leaves of a wide range of vegetation including agricultural crops, cereals, young trees and cabbages. In winter, they eat grasses, bulbs and bark. They re-ingest their faeces for nutritional benefit.

Rabbits have a burrow system known as a warren, and tunnels can be 1-2m long. The nest at the end of the tunnel is lined with grass, moss and belly fur. They use regular trails, which they scent mark with faecal pellets. They damage crops & grassland by digging shallow holes to get at roots as well as eating the grass/crops. They will also destroy many garden plants & small trees.

Mating occurs throughout the year with most litters born between February and August. Litters range in size between 3 and 12, after a gestation period of 28-33 days, and the kittens are weaned after 28 days. Due to this rapid breeding potential rabbit populations can withstand high mortality from natural causes, so control efforts by man must add to these, not merely replace them, if direct control is to be effective. Because of the size of the effort required, and the rabbit’s inherent capacity for population increase, complete eradication is impractical. Instead, the aim should be to reduce rabbit numbers to levels at which damage is economically acceptable.
Rabbits do not respect boundaries and the most effective results will be achieved if management action is undertaken on adjoining land at the same time in a co-operative exercise. Fencing areas & then eliminating the population in the fenced areas can be undertaken. But control may take some time.

Rabbit populations are increasing, as they are becoming immune to the myxomatosis virus. Rabbits become sexually mature after just four months and breed rapidly, so they can readily replace themselves. The introduction of the disease myxamatosis into the rabbit population in the 1950’s put a temporary reduction on the rabbit population. However, in the past 20 years or so, widespread resistance to the disease has resulted in greater numbers being seen across the country – in many places back up to 1950’s levels. As previously mentioned rabbits are vermin & landowners have a legal obligation to control them.