Why do chimneys need protecting from honeybees?

Honeybees like to nest in dry cavities such as chimneys. However they are a huge nuisance, particularly as a colony can comprise several thousand bees. Not only will they be noisy but they can get into your home. Beeswax is a fire hazard so an open fire isn’t possible. If a gas appliance is venting into a chimney it can’t be used as the consequences could be fatal.

Why is it difficult to get rid of a honeybee nest from a chimney?

To completely eradicate a honeybee nest from a chimney is a difficult task. It can only be done when the nest is completely active and usually has to be carried out from the roof which requires two people with a roof ladder. PEST UK would prefer not to destroy any bees but, as a last resort, to remove bees and their nest from a chimney we may have to use insecticide. Not only does this destroy the bees in the chimney but it could contaminate bees from other colonies so it may be necessary to net the chimney to prevent insecticide contamination to other bees. The beeswax will need to be removed along with any debris from the nest as this is flammable so the chimney will need to be swept.

A wasp nest is easier to get rid of as it only lasts a year. During the winter you may see wasps coming out of a chimney from the old nest as queen wasps could be hibernating in there.

How do we prevent bees & wasps from accessing a chimney?

Preventing bees and wasps getting into a chimney and establishing a nest in the first place is the most practical and bee-friendly solution. The best way is to install mesh at the top of the chimney. The mesh is fine enough to prevent bees and wasps from getting through it. We will also check that there are no other ways bees or wasps can access the chimney and seal any cracks in the masonry and leading surrounding the stack.

The best time to install mesh in chimneys is in the winter or early spring before the honeybees and wasps start to look for new sites to build their nests.

What problems are caused by a jackdaw’s nest in a chimney?

A jackdaw is the most likely bird to nest in a chimney and this causes lots of problems. They like to nest in chimneys and build their nests by pushing twigs down into the chimney pot until they are wedged tight. This can take a huge amount of twigs as lots fall down the chimney before a base is formed. 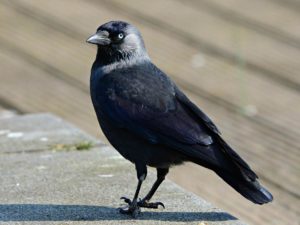 Jackdaws can also fall down the chimney and land in the fireplace below, making a mess because the jackdaw disturbs soot in the chimney and dislodges twigs as it falls.  It may also fly around the room in panic spreading soot onto the carpets and walls.

When a fireplace is disused and blocked up a jackdaw can get down the chimney and become trapped within the chimney breast.

How do we prevent jackdaws and other birds from accessing a chimney?

How much does it cost to protect a chimney from bees, wasps & birds?

Removal or treatment of bees, a bee nest, a wasp nest and installation of bee mesh, wire balloon or cowl from £200/£230 +VAT