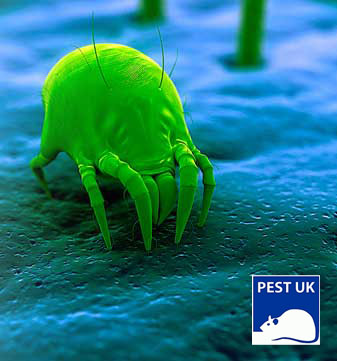 How Do I Know I Have A Mite Problem?

There are many different types of mites but the ones that are troublesome to people are:

The Plaster Beetle & Booklice are mentioned because although not Mites they thrive under the same sort of conditions. The Plaster Beetle & Booklice feed off the mould that grows on plaster & glue from packaging & books. They are often found in new houses or fresh plaster although the moulds needed to support them may not appear until some months after the plaster has been laid.

They can also be found in bird nests & any damp material. They all will be seen moving slowly across walls & ceilings. They are more easily noticed on light covered surfaces. Bird or Poultry Mites will bite people.

Why Should Mites Be Treated?

As mentioned Bird Mites can bite humans, Flour Mites can damage and taint food materials and rendering them unpalatable, they can cause respiratory disorders as well as irritation or dermatitis to persons handling infested commodities, Clover Mites are generally only a nuisance. Plaster beetles & Booklice will stray into cupboards, clothes in fact everywhere. They can originate in birds’ nests.

If Flour Mites are a problem then the infested foodstuffs need destroying and the cupboards clearing and clearing prior to treatment. With Bird Mites (& Paster Beetles/Booklice) any birds nest needs removing. In all cases the rooms will have to be sprayed so anything that would be damaged by a fine mist of water needs removing or covering. All pets must be out of the room. The areas to be treated must be clean, dust & grease free. Insecticides only work on clean surfaces.

The infested and surrounding areas have been treated with one or more of the following insecticides: Effect Microtech CS’* which contains Lambdacyhalothrin, Ficam W which contains 80% Bendiocarb w/w or K-Othrine which contains Deltamethrin. Also a powder might be used called Ficam D*. This contains an insecticide in a dust formulation @ 1% w/w Bendiocarb. All insecticides are biodegradable, almost odourless, non tainting & do not corrode or stain. They are not highly toxic towards mammals but are extremely so to all forms of crawling and flying public health pests.

Mites, Booklice & Plaster Beetles like humid conditions & the treatment will only succeed if the areas are kept well ventilated – i.e. windows must be left open at all times & the heating left on. It must be warm & well ventilated. Heating & not ventilating properly will lead to the treatment failing. In the case of the Clover Mite it may be necessary to remove plants & turf from the edge of the affected building. With Poultry or Bird Mites the birds nests must be removed & proofing measures carried out to prevent birds nesting in the future. After treatment do not let domestic animals walk on treated surfaces until dry and if bare skin comes into contact while wet then wash. You may see mites/Plaster Beetles (in small numbers) for up to 2-3 weeks after treatment. As long as the surfaces that have been treated are not washed or vacuumed the insecticide will remain active for up to 3 months. So do not vacuum, wipe or wash treated areas until a week after the infestation has finished (once dead mites are no longer seen).

We guarantee to reduce the infestation, complete eradication depends on humidity & the successful removal of turf, plants & birds nests depending on which pest is present. Insecticide treatments will only work on clean surfaces.

Flour Mite And The Furniture Mite

These mites are less than 0.5mm (1/32″) in size. They are translucent light buff in colour, wingless and oval in shape.

“Bird mites”, “Tropical fowl mites” or “Starling Mites” are the common names used to describe the mite Ornithonyssus bursa from the family of mites Macronyssidae. Bird mites are most active during Spring and early Summer. They are are problem usually when the birds leave the nest & the mites have nothing to feed on. They will then spread & will feed off other animals. They are small but extremely mobile, barely visible to the eye, with eight legs (except the larva that has 6), oval in shape and with a sparse covering of short hairs. They feed on the blood of common birds including pigeons, starlings, sparrows & poultry.

Bird mites are semitransparent in colour, which makes them difficult to detect on skin until blood is ingested and then digested; when they may appear reddish to blackish. They will show up when crawling across a light coloured ceiling or wall. They move slowly. The mites feed on the un feathered nestlings, as well as the adult birds, and the large amount of nesting material used by the birds provide the mites with an ideal environment in which to thrive. The mites have a short life cycle (approximately 7 days) and can rapidly generate large populations. When the young birds leave the nest, or die, many mites (often many tens of thousands) are left behind in the absence of a suitable host, and these will disperse from the nest into and throughout the dwelling searching for new hosts. Most mites will die within 3 weeks without a blood meal from a bird host. They will bite humans they encounter but cannot survive on human blood. As a result of their ‘test biting’ while searching for a new bird host, the mites inject saliva. This can lead to severe irritation with rashes and intense itching. Scratching of the bites may result in secondary infections.

Bird mites are not associated with the transmission of any infectious disease. The bites are often difficult to diagnose and can be mistaken for bites from a number of other arthropods. The greatest impacts from bird mites are usually experienced in rooms close to the point of entry of the mites. The mites have no preference for any particular areas of the body and they do not live underneath the skin, nor can an infestation be maintained on humans. However, the problem will persist while the bird-related source of the mites remains. Until the infestation is controlled, the occupants of the building can experience considerable discomfort. Also, the sensation of crawling mites on the skin will irritate some people. Professional treatment with a residual insecticide is necessary & if possible removing the bird’s nest is the only solution. Proofing the bird’s entry points into the roof is also needed.

As autumn approaches and the weather gets cooler these insects sometimes move into buildings through cracks in window frames etc. Although they are of no public health significance and can’t damage textiles or foodstuffs, their nuisance value can be quite considerable. Professional treatment with a residual insecticide & if possible removing vegetation close to windows, doors & air bricks is often needed.

Booklice (or psocids) are a common but harmless insect that can usually be found in animal nests, tree trunk crevices, under bark or on leaves. They are known better, however, as pests in the home as well as food manufacturing or retail premises. They can be a major nuisance pest on walls with new plaster. Booklice (& Plaster Beetles) feed on the microscopic moulds that grow on new plaster as it dries out. This drying process may take several years. Professional treatment accompanied by thorough ventilation & heat is required.

Psocids are tiny (about 1mm long) grey or brown insects. Food cupboards become infested with them, with the packaging from flour, milk, powder, sugar or semolina covered in them. The food itself is not at fault. Psocids are not caused by poor hygiene, and in most cases the type of psocid found in domestic premises if not found in places where the food is produced. Psocids are also known as booklice because some types of the insect are attracted to delicate materials such as books and furs. Here they can cause significant damage.

They are attracted by the warmth and damp often found in kitchens, especially the darkness of kitchen cupboards. Some foods, including flour, naturally contain some moisture and it is here that psocids are likely to increase rapidly in number. They are also attracted by microscopic moulds that develop in humid conditions. Bathrooms as well provide ideal conditions. Moisture in these and other rooms in the home can be caused by not enough ventilation – this is most likely during the summer months.

Do Psocids Do Any Harm?

Psocids do not cause any direct harm in small numbers although large infestations contaminate foods. They are also known to swarm over new plaster which may still be damp. Again they do not cause any harm as they are attracted by minute bacteria and moulds.

How Can I Prevent Reinfestation?

As long as the kitchen and food cupboards are well ventilated and dry and you have not kept the food in these cupboards after its best before date, it should be possible to prevent a reinfestation of psocids. Check packaging before buying to make sure that it is not damaged, and foods that are vulnerable – flour, semolina, etc – can be stored in washable covered containers. Keeping the areas dry, warm & well ventilated is needed.

Very small black or brown beetles (about 2 mm long), which frequently appear in newly-built and reconditioned houses. Several kinds may be found and often occur together. They feed on moulds and mildews and can only survive in damp conditions. The beetles may sometimes infest food stuffs, fabrics, carpets, etc., that have become mouldy. The conditions found in new and refurbished buildings suit them, since moulds may develop on recently plastered walls and ceilings before drying-out has been completed. Generally, the beetles soon disappear once everything has dried but as mentioned before this may take several years. They often appear alongside Booklice that will feed off the same moulds.