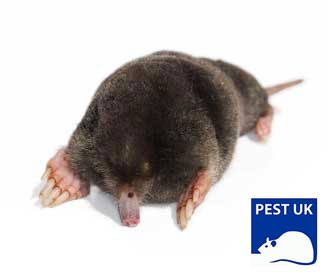 There are 2 ways to deal with moles, trapping or gassing. With trapping, traps are set in the runs. The draw back with traps is that often they have to be moved if the the mole starts tunneling in a different area. With the gas the mole runs are treated by putting a fumigation tablet of PHOSTOXIN (brand name is Talunex). This relies on moisture in the soil releasing the gas so is not suitable in dry conditions.

Traps are put in places most likely to catch the mole quickly. Moles are not sociable animals and adults often live alone, defending their territory against other moles but in areas of high populations of worms several moles may be present in an area. The size of the territory depends on food supply, which can be between 400-2000 square metres. Trapping can be based on either two or several visits depending on the technicians & the customer’s preference. Due to the erratic and unpredictable behaviour of moles, generally we do not offer any guarantees although we do pride ourselves in our technicians having 100% success rates when trapping for moles.

Gas treatments are not always successful, especially if the is dry and if the mole is killed then the territory can be occupied soon after, areas previously occupied by a mole is likely to attract another one soon after the territory is vacant. The price charged for gassing is per application. 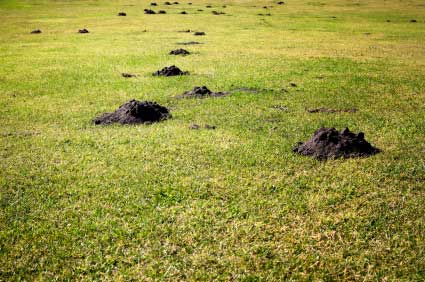 The mole (Talpa europaea) is a common British mammal and although rarely seen, due to its subterranean existence, its presence is well marked by the appearance of ‘molehills’ above ground, produced as a result of its underground tunnelling activity.

Molehills and tunnels can be a real nuisance in gardens, golf courses, race-courses and other amenity areas.
Moles are territorial creatures, living alone in an extensive network of tunnels covering anything up to 4 acres, in soils suitable for tunneling. Almost blind but with a good sense of smell, moles feed predominantly on earthworms which they unearth during their tunnel digging activities. Several young are born every spring but within five to six weeks they move out, over-ground, to establish their own territories. If you have a mole in the garden it may be one but in areas where worms are plentiful several moles could live in a fairly small area.

There are two main methods of controlling moles and each method has its advantages and disadvantages.

Success rate of about 80%, no digging but not residual. If it is successful in killing the resident mole (it usually is) then the area may be re infested at a later date. Luxan Talunex (aluminum phosphide) comes formulated as a pellet, which reacts with moisture in the soil and gives off phosphine gas. Talunex is very expensive.

Very labour intensive, traps may have to be moved several times before the mole is caught. Although trapping is regarded by some as old-fashioned using them is labour intensive, more costly site visits are required and there are frequent loses either from people pulling them up or by them getting dragged down by the mole or damaged by machinery. There are a number of different types of traps that are used, we use the ‘Tunnel’ or the ‘Trapline’ type.These fit under the soil so they can’t be seen as can most others. There is a humane trap available but it rarely works. All technicians at PEST UK have been trained by ADAS, the BPCA or Killgerm Chemicals in Mole control.