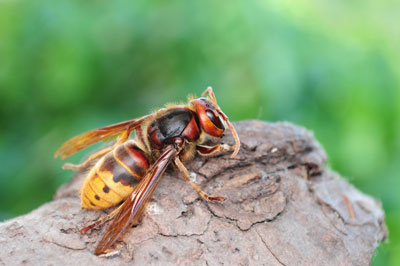 How Do I Know I Have A Hornets Nest?

If you see hornets entering & leaving a hole in the ground, a wall, roof or any other part of a building between May & November then you probably have a hornets nest. As the numbers in a nest are not as great as wasp nests they are often not noticed until much later in the year, often when the days are shortening as hornets are attracted to artificial lights.

You may be getting ‘unexplained’ hornets inside a room which may indicate a nest nearby.
Do not be tempted to block the hole up, this will make them angry and aggressive but will not kill the nest, they will find another entrance & may even come inside the house.

Nests are a grey or brown structure made of a paper mache type material. Hornets are aggressive and will sting readily if they think the nest is in danger but generally they are less aggressive than wasps.

Why Should A Hornets Nest Be Treated?

If you don’t treat a hornets nest it will eventually die out but before this happens the nest will produce fertile Queens that will hibernate and start nests the following year. The lifecycle of hornets is very similar to wasps. They feed on the same foods and change habits with the seasons. In the Autumn they change their diet and as wasps can cause massive amount of damage to fruits in the Autumn.

We treat the nest or the entrance of the nest using an insecticide called ‘FICAM D* which contains the chemical Bendiocarb 1% w/w. This is a modern biodegradable insecticide that is not highly toxic to mammals, but is extremely so to the hymenopterous group of insects (Hornets, Wasps, Bees and Ants). The entrance to the nest or the nest itself will be treated using this insecticide.

What Do I Need To Do Afterwards?

After treatment the nest will remain in a hyperactive state for up to 3 hrs, but usually Hornet activity ceases much sooner. Keep people & pets away from the area until activity has ceased. Close windows & warn neighbours to keep away.
The 3 main points to remember are:

The nest itself is made of a substance similar to paper mache, which will not rot or smell, so it is quite safe and hygienic to leave where it is. If the nest is accessible and you do decide to remove it, wait for at least four weeks as this will ensure that no one will get stung by any larvae that have hatched out after the queen has died, occasionally scratching may be heard from the nest during this period but as long as outside activity has ceased, don’t worry as this will soon die out. If the nest is treated in the Autumn dying Hornets, Queens and Drones may still appear for up to 20 days after treatment. Never block the entrance to a nest unless you are quite sure the nest is dead e.g. Hornets are not flying in and out of the entrance.

It seems to be common sense to remove the hornet nest after treatment but the removal of a hornet nest is not necessary. Firstly if a nest was removed as soon as the treatment was carried out then the hornets that were out foraging would return, find no nest & attempt to rebuild the hornets nest. When they return & find a treated nest they either get contaminated by the insecticide or exhaust themselves by flying around the nest in a state of panic. They only attempt to rebuild the nest if it isn’t there. Secondly a hornets nest can never be re used. So if you want to remove the hornets nest then we recommend you wait at least 4 weeks before doing so. In a lot of cases the hornet nest is not accessible. The nest may be in a cavity wall or a soffit that cannot be seen.

Over the past 10 years PEST UK has been seeing an ever increasing amount of Hornets. They do best in ‘poor’ wasp years, these are years that for whatever reasons the number of wasp nests have been low. It may be that they prefer different conditions but must probably is that they are competing for the same foods and living spaces. Although much larger than wasps and individually a wasp is no match for a hornet their nests contain only several hundred where as wasp nests may contain several thousand. The life cycle of both wasps and hornets are nearly identical. Although Hornet nests can contain several hundred hornets in reality it may be much less. I have found nests in late Summer that only had about 10 hornets in. I believe that if the nest struggles they may act as do some Bumble Bee species in the arctic, they either don’t produce workers but go straight on to produce queens and drones or produce fewer workers before producing the queens and drones.

A PEST UK Hornet call outs peak in the Autumn. The reason for this is light. Although this is also apparent with wasps it seems more so with hornets that they are attracted to artificial light, especially when the days start drawing in. Often the first indication a house holder will have of a hornets nest is when they find them buzzing around lights. Locating a hornets nest can be difficult if the number of hornets in the nest is small. A nest with a low number in will produce a lot less ‘traffic’ (the movement of hornets into & leaving the nest). Looking at traffic of a wasp or hornets nest may be the only way to locate a nest if the nest cannot be seen, if it was built in a place like in a cavity wall or boxed off area.

The lifecycle of hornets is the same as wasps. Queens emerge from hibernation in the Spring and construct a nest. Eggs are laid in the special constructed cells which hatch into grubs. These are fed a high protein diet of insects and grubs. The first batch to pupate and turn into adults are workers which are sterilised females. These workers take over the running of the nest. Mid to late Summer the Queen lays the last batch of eggs which are fed a diet that allows them to be the sexual forms of the species, Queens and Drones. These mate with Queens and Drones from other nests, the original Queen, workers and Drones die off by the Winter and the new Queens hibernate and the cycle continues.