Why use a professional company to remove bees?

Usually a swarm of bees is harmless and only lasts for a few days. It’s only necessary to remove bees if they are nesting or swarming somewhere inconvenient or dangerous for people living or working nearby. The bees will not hesitate to sting if they perceive they or their nest are under threat. This can be a dangerous situation because of the large numbers in a nest or swarm.

Wherever possible we collect the bees from a nest or swarm and rehome them with a local beekeeper. We remove the nest, debris and honey the bees have produced as this is a target for parasites. We also proof the area occupied by the nest as it’s likely to attract more bees in the near future.

Why do bees swarm? 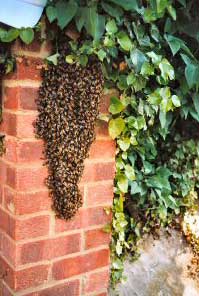 Only honeybees swarm. A swarm contains several thousand bees and ‘hangs’ in one place for several days. Garages, sheds, chimneys, outside walls, under the eaves of roofs, under trees and bushes are all favourite locations.

A swarm occurs when part of a colony splits because of overcrowding or as a natural means of reproduction. A queen, accompanied by drones and several thousand workers, leaves the nest to find a suitable new nest site. Whilst the scout bees check out possible sites, the swarm hangs.

A whole colony will desert their nest to find a new nest site if there is a parasite infestation, disease, or a lack of food or water locally.

What are the signs of a bee nest? 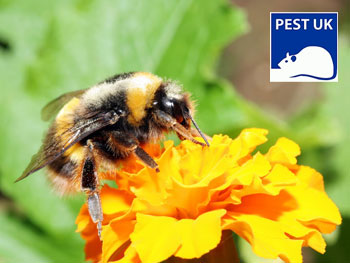 Honeybees nest in chimneys, wall cavities, roof spaces and other cavities within a property. If there is an excessive number of bees flying around your home and garden coming from multiple directions it’s likely you have a bee nest within your home or outbuildings. You may see activity around a particular part of the roof or a hole in the wall which will be where the entrance is to the bee nest. A colony consists of thousands of bees which are very noisy. You may also see stained paintwork caused by the honey they produce.

What we do to treat bees if it is necessary?

If bees cannot be removed, treatment of the bee nest using insecticide is sometimes the only solution. If the nest is in a chimney it may require two technicians using roof ladders to carry out the work.

What do I do afterwards?

After treatment, the bees may remain in a hyperactive state for a few hours, but usually activity will completely cease within 7 days (cold or wet days may prolong activity).

We do not guarantee honeybees. Complete eradication of mason and mining bees is not always possible but the treatment should reduce numbers significantly.

How much does it cost to get rid of bees?

In the UK we have around 270 species of bee. 250 of theses species are solitary bees such as mason and mining bees. The other species are bumblebees and honeybees which are social and live in colonies.

Mason and mining bees make their nests in wall cavities. Each female lays eggs. She digs out weak or old-style mortar and makes a hole for each egg laid, then packs it with pollen seals the hole. The egg hatches into a grub that feeds on the pollen and emerges the following spring as an adult.

We treat the affected areas with an insecticide, however re-pointing crumbling mortar may be the only long-term solution to stop mason and mining bees.

Honeybees nest in colonies headed by a single fertile female, the queen, the only bee which can lay eggs. The other female bees are called worker bees. Honey and pollen are stored and larvae are reared in cells made from wax secreted by the worker bees. They also collect the pollen and nectar to feed the queen and larvae and keep the nest clear of debris. The queen lives longer than a year and colonies survive in the same place for many years.

Two attributes of honeybees that have been essential to their evolution – their clustering behaviour and their ability to cool the nest by evaporating the water collected outside. This enables the colonies to regulate the  temperature within their nests irrespective of the external temperature. Honeybees are also able to communicate with each other about food sources by “dance language”.

Bumblebees live in small colonies with a nest the size of half a grapefruit. The queen begins a new nest with a ball of pollen and wax into which she lays approx. 6 eggs. When the eggs hatch the larvae eat the pollen reserve which the queen continually adds to, sealing them in with wax. Once the larvae pupates the queen spins a bright yellow cocoon of silk from which they emerge as fully grown female worker bees.

The worker bees collect pollen and nectar, allowing the queen to stay in the nest and lay more eggs. This continues throughout late spring and summer until the nest has reached full size. The queen then lays eggs destined to become next year’s queen bees as well as drones which are male bees. Once the drones have hatched they leave the nest and live independent lives, their only purpose being to mate with the young queens to ensure the survival of the species. The young queens continue to live and work in the mother colony until the autumn. Come the first sharp drop in temperature the old queen, her workers and the independent drones die. Only the newly mated queens seek out a place to hibernate in safety to begin the cycle again the following spring.