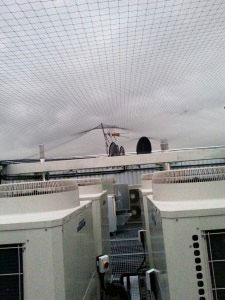 It is often necessary to prevent birds (usually pigeons) from roosting and nesting. In the case of pigeons this is usually done by netting or spiking. We have staff who are highly experienced in this field. Please phone for a free quotation: 0330 1002811 / 0800 026 0308.

Often birds get into the eaves of houses. This can cause problems of parasites, noise & mess. Unfortunately the types of birds that nest in these areas are usually starlings or sparrows, both are protected and it is against the law to disturb, eggs, nests or young. Blocking off the holes will have to be done when none are present.

Pigeon Netting Carried Out On Hotel Rooftop In Slough, Berks
Pigeons were fouling a rooftop plant room on top of a city centre hotel in Slough. Not only was it a nuisance for the hotel management, but it is also a serious health hazard to any workmen such as air conditioning engineers who need access to the roof area. 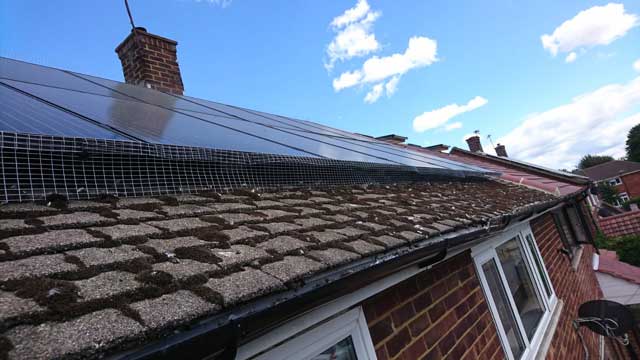 Birds are learning that Solar Panels are and nice place to roost, nest and shelter. At PESTUK we are receiving an increasing amount of calls relating to this problem. We now have access to a newly designed bird spike that has been designed for use with solar panels. This is similar to a ‘normal’ bird spike but set at an angle to prevent birds gaining access. This allows the base to have maximum contact with the roof making to spike stable and strong. It may take time but these problems with birds and solar panels will increase as birds learn this behaviour and pass it down to their offspring. These spikes unlike other methods (mainly wire mesh) allow adequate ventilation under the panels and also allow larger items such as leaves pass through rather than getting caught and building up as does happen with mesh.

The problems that nesting birds may cause include smells, buildup of droppings (blocking gutters and drains), noise and general nuisance. Pigeon droppings also carry Psittacosis which is carried in the dust of dried pigeon droppings.

Owls and other birds of prey, live or stuffed do not work in the long term. This allies not only to solar panels but any sites where So many times we get called to sites where a stuffed Eagle Owl or similar bird of prey has been used to scare off pigeon, starlings or sea gulls. They do work for a very short time but these birds are not that stupid and in a matter of weeks or even days they will ignore them completely. Even using live birds of prey have limited effect. The birds will depart once the bird of prey is present but will return one the bird of prey has gone.

Bird Free ‘Fire Gel’ is a new method first introduced in 2011 that appears to birds that there is a fire, making them avoid the area. It is installed in small dishes, is non toxic unobtrusive (unlike spikes or netting) and low maintenance. It may need to be replaced every 2 years but in most cases not. The drawback of Bird Free Fire Gel is the cost, roughly £35 + VAT per metre including installation. It has been used successfully at the following sites:

Covent Garden Market and Paddington Station in London, Mont St Michel in Normandy, Chateau de Chambord in the Loire Valley, Lutyens’ Thiepval Memorial in Picardie, Sagrada Familia in Barcelona and St Andrew’s University in Scotland, where it is keeping the gulls away.

Bird Free Fire Gel is harmless, odourless and a humane method of deterring all types of birds.