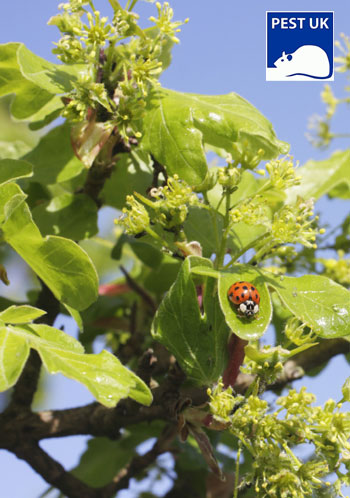 These are a pest that 5 years ago we would have no enquiries or jobs for. Now they are a more common occurrence than a pest with similar behaviour, the Cluster Fly.

Although one is a fly and the other a member of the beetle family, their nuisance value to humans is the same, they both hibernate in large numbers in buildings. The going in and coming out of hibernation takes time, they do’t just fly into the hibernation site, hibernate and then leave in the Spring, it is more complex that that which leads to problems.

First, even without the added interruption of artificial heat and light that they may experience in a building, they go into hibernation gradually often sunning themselves on walls before going into the site at night or in cold spells. The same applies except in reverse when they emerge from hibernation in the Spring. In buildings the insects often got lost in the structure of the building emerging in rooms where it is too warm and dieting but in the process becoming a nuisance to the occupiers. You will often find dead insects around windows as they try to find a way out. This sort of behaviour is common not only with Harlequin Ladybirds but other insects such as flies and wasps.

Harlequin Ladybirds differ from the native British Ladybird by size, colour and crucially for pest controllers their hibernation habits. The colours of the Harlequin Ladybird vary from Pale Orange, to black with a variety of different spot configurations. They are also known as the Multi coloured Asian Ladybird or the Halloween Ladybird. The difference is that Harlequin Ladybirds hibernate in large groups in buildings in the same way that Cluster Flies do. As with Cluster Flies it appears that once a site is chosen the descendants tend to use the same site year after year. This is because of genetic memory where the memory of the site is passed down to the insects descendants.

Treatment For Harlequin Ladybirds Is Similar To Cluster Flies

A residual insecticide is applied to areas the insects are seen, such as around windows (inside & out), walls, ceilings and lofts. Loft spaces and similar cavities may be treated with an insecticide fog. Insecticide treatments will reduce the problem greatly but not eliminate the infestation. The reason for this is that a high number of insects may be hibernating in areas that do not come into contact with the applied insecticide such as cavity walls, boxed off areas in roofs or between the felt & the roof tiles. As insects come into contact with the treated surfaces they will absorb the insecticide and die but this may take some time depending on the temperature (cold weather slows the insect’s metabolism down so they take much longer to die) and another factor is how long ago the insecticide was applied, inside the residual spray may last 1-2 months but obviously after 2 months it will not be as potent as after a few days. All the modern insecticides are biodegradable to make them safe, the drawback of this being that they are quite delicate so will break down if aggregated by cleaning or other wear.

After treatment do not let domestic animals walk on treated surfaces until dry and if bare skin comes into contact while wet then wash. As long as the surfaces that have been treated are not washed down the insecticide will remain active for up to 2 months.

Dying Ladybirds may be seen in some numbers up to 4 weeks after treatment. There is a strong possibility that any survivors will build up their numbers to nuisance level again in the following years. In fact once a hibernation site is selected it will be used year after year. The treatment will not eliminate the Ladybird infestation but kill the vast majority of Ladybirds present at the time of treatment, they can take time to die, how quickly depends on temperature and how much insecticide they have absorbed.
PEST UK Terms & Conditions apply. If you have any complaints or comments about the service, phone & let us know.

Back in June 2009 Scientists presenting at the Royal Society Summer Exhibition in London warned that the invasive of the Harlequin Ladybird is likely to threaten more than 1000 of Britain’s native species.
The Harlequin has spread from Essex to Orkney in only four years and is now one of the fastest spreading non-native species in Europe, as well as the most invasive ladybird on Earth. They have now spread all over England and seem to be displacing the native British Ladybird.

Although displacing the British species they (as the British species does) do a lot of good by their consumption of aphids. As well as acids they eat other insects, larvae of butterflies, moths and other ladybirds. Pollen, nectar, fruit juices and honeydew are also eaten.

The problem they are going to cause in the uk are not yet clear but time will tell. In Asia they can be a best in vineyards and orchards. The populations at present are found mainly in towns but are spreading to the countryside.