Get Rid Of Bird Problems | Hawking With Birds Of Prey 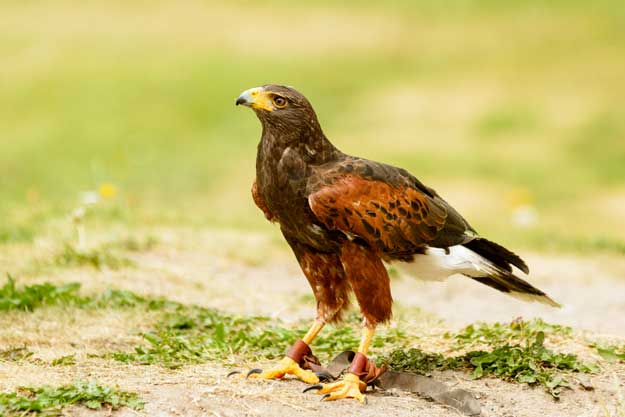 Situations When Hawking May Be Required

Nuisance birds such as pigeons and gulls can cause damage to properties, cause a noise disturbance
and also smells. Birds also carry diseases through fouling, nesting materials and other waste. This is not only an issue to the health of workers but can cause damage to a companies reputation with the possibility of customers and the general public slipping on the waste.
Hawking is NOT a replacement for prooﬁng (netting and or spiking) and needs to be carried out on a regular basis to be effective. It is useful at sites where traditional methods, such as spiking and netting are not ideal or feasible. The Hawking method may discourage pigeons and gulls from feeding, nesting and roosting in a particular area. We would speciﬁcally tailor a programme to the needs of the individual by carrying out a free no-obligation quotation.

There are various beneﬁts with hawking with the most obvious being that it is environmentally friendly and there are no visual effects which are associated with netting and spiking. The use of hawks is a humane method, as the nuisance birds are not killed but simply ‘scared’ away. The birds of prey are trained to a high level and only receive food from their handler and will not attack other birds or animals. They will also not pester the general public and are undisturbed by machinery or people.

Chris Gray is our specialist technician for hawking. He started falconry when he was 5 years old with his father, who is also a falconer. Chris currently owns 5 Harris Hawks. Chris also owns 2 Peregrine hybrids which can be used in situations like land ﬁll sites. Chris also has 2 Peregrine falcons and a hybrid Gyrfalcon.

Prices for hawking are hugely dependant on the situation itself however a typical programme which consists of a 2-hour ﬂight will cost £200.00 + VAT but this is subject to the location of the site.

Hawking if carried out on a regular basis may discourage birds from roosting and nesting. The effectiveness of the programme is very dependant on the frequency of the visits carried out. We cannot guarantee to eradicate nuisance birds completely but the programmes are tailored in order to give you the best results possible.

Occasionally rooks, crows or magpies may cause problems but are not a common problem. The main complaint regarding Feral Pigeons is the mess they make, a roosting pigeon will make a considerable pile of droppings in one night. House Martins nests should only be removed and areas proofed once the birds have migrated to their wintering sites. Crows & Magpies can be shot or trapped using a Larson Crow Trap. These are rarely a problem for domestic premises. Below are descriptions of the 3 main nuisance species: Feral Pigeons, Sparrows & Starlings. Doves are closely related to Feral Pigeons and legally come under the same classification when it comes to controlling.

Columba livia (domest.)
Pigeons are actually domesticated rock doves that have returned to wild or semi-wild conditions. Some rock doves were domesticated for food, others as homing pigeons, and some as ‘fancy’ pigeons, bred for their plumage.

They average 3-5 years in the wild. Captive pigeons can live for 15 years but some have been known to live for up to 35 years.

Feral pigeons are generally grey birds with slightly iridescent feathers on the neck that shine pink and green in the sunlight. Coloration is very variable with some individuals being white, others brownish-red, some grey and many mixtures. The eyes are orange and shine brightly in the sunlight.

Feral pigeons are widespread and very common throughout Europe. They are also found in Africa, North America, South America and Asia.

They inhabit coastal cliffs or buildings in towns and cities. The numbers have increased dramatically in the past 60 years. This is mainly due to the birds using buildings for nesting and roosting.

Wild rock doves feed on seeds but the diet of the pigeons has grown to include bread, vegetables, meat and other food discarded by humans. Pigeons are not generally fussy eaters, they have only 37 taste buds (humans have around 10,000). Food is not a problem for birds in towns and cities. The controlling factor is the availability of night roosting and nesting sites, of which there will be many in built-up areas. It is important for them to roost fairly high (above 2 metres is preferred) with a wall to nestle against and be out of the wind.

Pigeons feed on the ground in flocks or individually. They roost together in buildings or on walls or statues. When drinking, most birds take small sips and tilt their heads backwards to swallow the water. Pigeons are able to dip their bills into the water and drink continuously without having to tilt their heads back. When disturbed, a pigeon in a group will take off with a noisy clapping sound. This helps inform the other pigeons that there is danger present. If a pigeon is alone it will respond to danger by keeping very still and trying not to be noticed. Pigeons are excellent fliers and can reach speeds of up to 50 mph. They are capable of rapid dives and changes in direction and most of the time will easily outmaneuver a bird of prey.

During courtship the male will follow a female around bowing his head, fanning his tail and making ‘cooing’ noises. Eventually, a short dance begins with the male’s beak being held in the female’s. Mating occurs shortly afterward and is fairly brief. The male sits on the female’s back flapping his wings to keep balance. It may take several clumsy attempts before the male successfully mates with the female. Nests are built by the female using material collected by the male. The female lays clutches of two white eggs. Young pigeons are known as ‘squabs’. They are fed from a special substance produced in the pigeon’s crop known as ‘pigeon milk’. This substance is high in fat and protein and low in carbohydrates. They will breed all year-round. This makes culling to reduce populations not very effective unless carried out at regular intervals.

Starlings are probably one of the noisiest and most gregarious garden birds. The Starling’s plumage is mainly blackish with buff-edged wing feathers. In winter it has white speckles above and below, the sexes are alike but the male has fewer speckles on the rump and wings. The speckles go in the summer and the plumage becomes green and purple.

The colour of the base of its yellow beak can identify the sexes in the summer: pink for females, blue for males. The bills are dark grey-brown in the winter. Young Starlings have grey-brown plumage with white speckles on the underparts and light cream coloured throat but moult completely in the autumn to the spotty adult colour, and dark greyish beak. In-flight, Starlings have pointed triangular wings. The Rose Coloured Starling is a common vagrant from eastern Europe In the summer, the adults have black and pink plumage with the breast, belly and back being pink. Many of these visitors are juveniles and can be mistaken for common juvenile Starlings, with the exception that the bill is yellowish, the legs are pale pink, and the plumage is a pale grey-brown with darker wings.

Starlings are good at mimicry and will copy things such as telephones and car alarms, and other birds. Male Starlings can be heard singing throughout the year except when they are moulting in mid to late Summer.

Starlings feed on: insects, worms, snails, berries, fruit, scraps, suet. They only feed invertebrates to their young. The beak is used to probe the ground and is used to open part of the ground and reach any food that is buried. They will feed alongside Lapwings in wetland areas, feeding on the food that the Lapwings have disturbed.

The male builds a nest from the grass in a hole in a wall, tree or building, the female lines it with feathers, wool and moss. This is the most common cause of complaint, they build nests in eaves & lofts which can cause a disturbance, a build-up of droppings & insect parasites. The male may decorate the nest with leaves and petals in order to improve his chances of attracting a female. The eggs are pale light blue & about 30 mm by 21 mm. Both sexes take turns incubating & both feed the young. The female has been known to remove an egg from a neighbouring Starlings’ nests and lay one of her own in its place so as to give her offspring a better chance of surviving. The young usually leave by the end of May. In the winter, the starlings roost at night either in the city centre or in woodlands. When they roost on mass in town areas the droppings & noise can be a serious problem. Between 9.00 AM and 10.00 AM, flocks of starlings will visit suburban gardens looking for food, and then again just before dark, when they are usually also seen bathing. These numbers peak in the winter when migrants (up to 30 million birds from These numbers peak in the winter when migrants (up to 30 million birds from northern Europe) add to the numbers. The migrant birds have duller bills. Starling populations have declined seriously (by over 70%) in recent times and they have been taken off the list of birds that can be culled. There are several possible causes of this decline: changes in farming practices, changes in grassland management, fewer nesting sites in urban areas owing to household improvements and poorer survival rates among young birds. This may not be a bad thing as it has to be remembered that other species of birds are on the increase: Red Kites, Buzzards, Kestrels, etc.

Prices for hawking are hugely dependant on the situation itself however a typical programme which consists of a 2-hour ﬂight will cost £200.00 + VAT or £220.00 + VAT (depending on geographical location).