PEST UK / Featured / What are moles and why do they make molehills?

What are moles and why do they make molehills?

Most people have never seen a mole as they live almost entirely underground. They are cute, velvety creatures that grow to between 11 and 16 cm and have very tiny eyes. They have limited eyesight although it doesn’t matter because they live in darkness. Moles find their way around underground and detect food and water by sensing vibrations in the soil. They do this via the extremely sensitive tiny hairs and whiskers which cover their long noses. Moles are solitary creatures and usually avoid each other, except in the breeding season between February and June.

Why do moles make molehills? 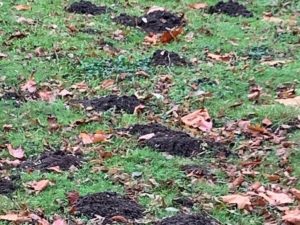 Moles are burrowing animals and they dig every day. When a mole digs a shallow tunnel just below the surface of lawns and flowerbeds it pushes the displaced soil up vertical tunnels to form molehills. These tunnels are temporary as the moles are digging them to search for food, such as earthworms and insects. Because moles are territorial, the molehills seen in a garden are likely to be the activity of just one mole. They usually dig these temporary tunnels in early winter and spring.

Moles create their own individual burrow system, a network of firm-walled interconnecting tunnels about 5cm wide, 4cm high and up to 70 metres long. Because they are mostly deep underground below the frost line the mole can still be active during the cold winter months.

What damage do moles cause?

What can be done to prevent moles?

Patting down molehills doesn’t close down a mole’s tunnels as they are diggers so will just dig through any soil that gets in their way. There are numerous ways to control moles but it’s best to seek professional advice. A pest control technician knows how to assess the extent of the situation and execute the correct treatment.

They are a full member of the BPCA (British Pest Control Association), the governing body for pest control in the UK. Using a BPCA member company ensures you have a qualified, professional and fully insured company treating your pest problem.

Offices are throughout the southeast including Banbury, Brackley, High Wycombe, Northampton and Oxford

Watch How a PEST UK Technician Treats and Prevents Infestations »
Do you have a rat problem? «