Wasp Traps & Feeding Habits:
August to October (maybe early November) are the months where wasp trapping is most beneficial.

Wasps are far more of a nuisance during late summer and autumn than at any other time of the year – more people are likely to be stung during this period!

There are several reasons for this. Firstly, this is when the workers no longer have any function. The Queen has stopped laying, and there are no grubs in the nest that need feeding. Her last brood (normally in August but can vary due the the weather etc) will now be  new Queens and Drones. These new Queens will hibernate after mating with Drones from other nests while the rest of the colony die off as winter approaches. By the time the Queen and Drone grubs have been raised and fed by the workers,  the original Queen may already have died leaving the workers with no work to do. Also, the days are getting shorter  so they are out of the nest in most of the daylight hours. Earlier in the summer more time may have been spent constructing and maintaining the nest, keeping the nest cool or tending to the grubs. The ceasing of grub production coincides with the ripening of fruit.

So the increase in wasp activity is largely due to the following factors: 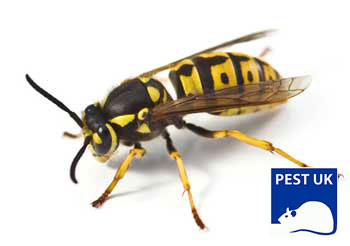 This means that people are more likely to be bothered when outside by wasps looking for food.

Wasp traps can relieve, but not solve the problem.

PEST UK have a number of clients (including domestic, golf courses, hotels, rubbish tips, polo centres, pubs, restaurants etc) who have wasp traps installed and serviced monthly at this time of the year. These types of traps have the added bonus of also attracting and catching flies.

In fact, our research shows that, where a wasp trap and a fly trap are placed side by side, the wasp trap is catching both flies and wasps in greater numbers than the fly trap  – not by a great deal and we are still testing this theory.

Wherever you have them, and whatever their reason for being there, we can get rid of them. Talk to us about setting up a contract for your premises.