Unusual Pests: Snakes, Bats, Scorpions, Minks, Hamsters:
I am frequently asked “What is the most unusual pest you have dealt with?”.

Like most pesties I have on a few occasions had to deal with snakes [actually a slow-worm], bats [protected of course], earwigs, pharoahs ants, spiders, foxes, and on two occasions, mink. However, my favourite occured whilst I was working in Brighton in 1995 and one of my hotels called me out to try and locate….. a hamster!

“Surely it was a mouse that was seen” was my first response on arrival. 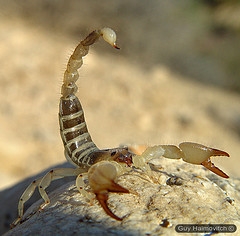 “I know what a hamster looks like” came the indignant reply. So with a shrug of the shoulders and armed with my torch I proceeded to crawl on all fours around the lobby area, bar, cellar and just about everywhere else looking for the intrepid freeloader. Alas after around 45 minutes of searching under pretty much item of furniture around had revealed no sign whatsoever of the “visitor” I had to give up the ghost. To this day I do not know what happened to Hammy. Probably just as well, I rather like hamsters and would not have known what to do with this particular one anyway.

This call-out pales into insignificance, however compared to my first supervisor when I first came into the business in 1991.

Working on a foot round in Central London my colleague told me that he had once had a call-out from a London hotel to treat…a SCORPION!

Needless to say he went into the room with a lot of trepidation and armed with gloves, a boiler suit and the usual torch. He did find the critter, but of course that’s only half the battle. The next problem is how to deal with the intruder.

It was here that a bit of ingenuity came into play. Using a simple stick he managed to flush his foe out, he then plastered it with an aerosol insecticide and put a glass on top until it was dead. Result!

Unfortunately I’ve never treated anything quite as exciting as that, but after twenty-one years in the business, nothing surprises me anymore and who’s to say I won’t have to get rid of a scorpion myself one day.