Spiders inside the house 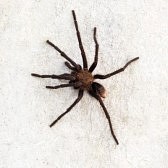 Although spiders do good by eating flies many people have a genuine fear of spiders. It is for this reason PEST UK provide a service for treating spiders. PESTUK receive many requests for spider control most commonly in autumn and early winter. This is when the spider population peaks and as the days shorten and the weather gets colder and wetter spiders and other insects will venture inside for shelter and warmth.

Treatment for spiders is fairly straightforward – we apply a residual insecticide externally around windows and doors as well as inside on walls and ceilings concentrating on the wall/ﬂoor and wall/ceiling junctions.

We ask that before we arrive to treat your home that you clean around windows, wall/floor junction and ceiling/wall junction and that floor  areas are clear of furniture and other objects but more importantly they are clean and dust free prior to treatment. Removing creepers and vegetation from external walls makes a difference as this removes shelter for them.

The rooms will be treated with one (or both) of the following insecticide sprays: Effect Microtech CS, which contains Permethrin, HSE Number 6287 and made by Sorex or K-Othrine WG250, HSE Number 5390 which contains deltamethrin 25%. These insecticides are the most modern insecticide available. The insecticide lasts for up to 3 months and the spiders absorb the insecticide as they walk over it and then die. After the treatment do not let domestic animals walk on treated surfaces until dry and if bare skin comes into contact whilst wet then wash. Do not vacuum the carpeted areas that have been treated for at least two weeks or longer if the rooms are at low temperature.

“False widow” is a general term for any one of up to about 120 species that resemble the notorious black widow. Steatoda nobilis, is the species that is currently making headlines in the UK. It is sometimes also referred to as a “British black widow”, and is about the size of a 50 pence piece. Steatoda nobilis is identifiable by its bulbous brown abdomen with cream coloured markings that often resemble the shape of a skull. It has a tawny body with reddish-orange legs. 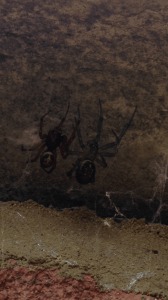 They are not very dangerous, they can bite but like all insect bites the reaction varies from person to person. The false widow is not uncommon in Berkshire, Hampshire, South Bucks, South Oxfordshire, West London & Surrey where they have been found for over 100 years. Its suspected to have arrived in Torquay as a stowaway in a crate of bananas from the Canary Islands.

They are very successful invertebrates, occurring all over the world in many different habitats including meadows, hill, wood and buildings. They are not insects but Arachnids and have been present in their current form since the Triassic period.

They lay eggs which hatch into miniature forms of the adults and then grow (after shedding their skins several times) into the adults. The females in all species is larger and heavier than the male. Many typers have acute vision, especially the ‘Hunting types’ that stalk their prey.

All are capable of injecting poison from their fangs into their prey. Very few spiders in England can puncture human skin. All are capable of spinning webs, even the new that don’t use webs to catch their prey. The web is spun from glands at the tail of the abdomen. They are very clean and spend hours grooming and cleaning.

Occasionally foreign spiders can be imported from hotter countries, these can kill, depending on the species.

Spiders by the BPCA: