Shepperton is a suburban town in the county of Surrey, bisected by the M3 in the North West and bounded to much of the South and East by the River Thames. Predominantly known for its use by film and Television production companies at Shepperton Studios.

Much of the land in the area is formed of protected flood meadows, small lakes or fertile alluvial soil farmland this can cause quite a problem with rats and mice using these as means of travel and as a food source. Also with any potential flooding this can run the risk of rodents being seen more prominently around properties and businesses.

We have many pest control contracts around the area of Shepperton with local businesses and with schools. All of our pest control technicians are CRB checked and bring a wealth of pest control experience and keen knowledge to any of your pest problems. 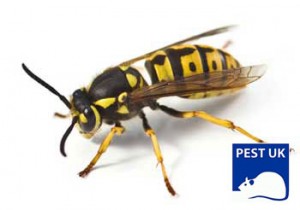 If you see Wasps entering a hole in the ground, wall, roof or any other part of a building then you may have a wasps nest. You may be getting ‘unexplained’ wasps in a room in your home which may indicate a nest nearby.

It is best not to block any holes up before a treatment as this will make them angry and aggressive and won’t kill them. it will force them to make a new hole and possibly enter the house. Nests are usually of a grey or brown paper mache type material. If untreated a nest will eventually die out, however before this the nest can potentially produce up to a 100 fertile Queens that would hibernate and begin nests of their own the following year.

Nests will continue to grow until Autumn time and then you will see aggressive and dopey wasps from this time until winter. Worker wasps  would have finished their job of nest maintenance & collecting food for grubs by this point and would now be feeding on rotting fruit (this will make them drunk and more aggressive). Wasp nests can stain ceilings and even eat through them in some instances.

We treat nests or their entrances by using  an insecticide called ‘FICAM D* which contains the chemical Bendiocarb 1% w/w. This is a modern biodegradable insecticide that is not highly toxic to mammals, but is extremely so to the hymenopterous group of insects (Wasps, Bees and Ants). The entrance to the nest or the nest itself will be treated using this insecticide. The nest after this treatment will remain in a hyper active state for up to 3 hours, but usually the activity would cease much sooner. It is best to keep members of the family and pets away from a treated nest and to advise neighbours of a treatment to avoid any disruption during the hyper active period.

The 3 main points to remember are: