Pest Control involving feral pigeons has always been a debated issue. It is true they do make good pets and are also used for sport however measures need to be taken against feral pigeons to protect the public from diseases such as psittacosis. Two of our staff have had first hand experience of diseases carried by feral pigeons as while working for Ecolab. Both contracted psittacosis and were very ill. Even now over 20 years later one of them still suffers from chest infections due to the scarring on his lungs. 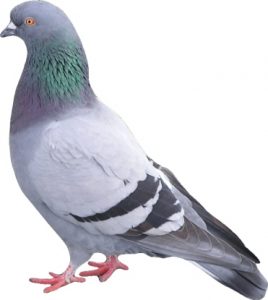 As well as diseases, they often cause a nuisance by fouling buildings and cars with their droppings which can also be a slip hazard. PEST UK get calls on a weekly basis concerning them from places such as from schools, restaurants and other public buildings. In order to prevent them from nesting on and around public buildings and spreading diseases in built up areas we provide a service to put up netting and pigeon spikes. These are both too deter the bird from landing/nesting and are not to intend on causing any harm. Please note that PEST UK do not, and will never, trap birds. 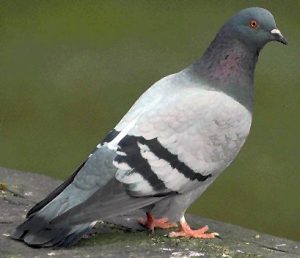 It is unfortunate that feral pigeons have to be excluded from areas and culled but feral pigeons are not natural to the UK, they are a mix of domestic doves, Rock Doves and racing pigeons. It is thought that the near extinction of the Rock Dove in the UK is down to feral pigeons.
Advice on Pigeons from the BPCA
PESTUK advise not to rescue or take in feral pigeons due to the possibility of them carrying diseases, however this is often overlooked and is considered a lot less taboo than rats. Rats can be great pets due to their loving nature although ‘rescuing’ a wild rat would be seen as absurd or even ‘disgusting’. Pigeons carry diseases just like rats so we advise to think more carefully when introducing a feral pigeon to your home.
Info on Pigeons from PESTUK
Pigeons and the Law

They are vermin. They can be controlled as long as this is done humanely by fully trained professional. This is what we do and unfortunately this does include the removal of chicks and shooting adult birds as a last resort. As with most vermin they will breed all year round (similarly to rats and mice). ‘Natural’ pigeons (such as wood p) restrict their breeding to Spring and Summer. The Countryside and Wildlife act allows their culling. Some people interpret the act in a different way and may see the culling of pigeons wrong. Many pest control companies because of this have been wrongly shamed and/or reported. The way we (and many other pest control companies) control these birds is not breaking the law but providing a necessary service which our customers have asked us to do.
Pigeons Proofing from PESTUK
Man & Pests

Humans have altered the natural environment so there is a need to control the animals in this artificial place. If not checked then the ‘natural’ inhabitants suffer. For example, the North American Grey Squirrel killed off the native Red Squirrel and caused many other problems in Australia. Populations of rats will decimate ground nesting birds, frogs, toads and eat food that hedgehogs would eat.

Pest Control can seem cruel and unnatural however it is an essential in our society to control and maintain pests for numerous reasons, from health and safety to population of other animals.