In Pests, The Environment

The recent spate of false widow spider reports in the news has raised concerns about what they are and where they’re found. 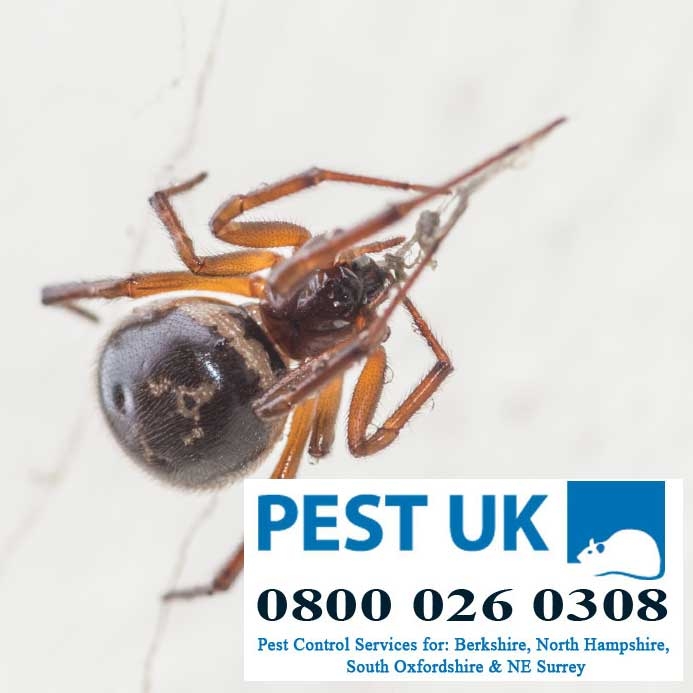 What Do They Look Like?
“False widow” is a general term for any one of up to about 120 species of spider that resemble the notorious black widow spider.
Steatoda nobilis, is the spider that is currently making headlines in the UK. It is sometimes also referred to as a “British black widow”, and is about the size of a 50 pence piece. Steatoda nobilis is identifiable by its bulbous brown abdomen with cream coloured markings that often resemble the shape of a skull. It has a tawny body with reddish-orange legs.

How Dangerous Are They?
There have been no reports of deaths from false widow bites, and it has been compared with eating a peanut – serious for those who are allergic to it, but not a problem for anyone else. If you suspect you have been bitten by a false widow and you are concerned about the symptoms, then it is probably a good idea to get medical advice, although this should not be necessary for most people.  Symptoms vary and can include chest pains, tingling fingers and hands, and localized painful swelling and itching. A False Widow Spider will only attack if provoked so if you do see one avoid touching it if possible, and either kill it or capture it in a jar.

Where Do They Come From?
The false widow spider is not uncommon in Devon, where it has been found for over 100 years. It is suspected to have arrived in Torquay as a stowaway in a crate of bananas from the Canary Islands. Devon has provided a perfect climate for the false widow to thrive, and climate change in recent years has made it easier for the False Widow to become establish itself beyond Devon. The Natural History Museum’s Insect Information Service suggests that it will continue to spread northwards in years to come.

Are There False Widow Spiders in Berkshire, Hampshire and Surrey?
PestUK have never removed a false widow spider, although we have had numerous “false” alarms! We have had some specimens analyzed by our laboratory, but none have ever been verified as False Widow Spiders. Recent newspaper articles about False Widows sightings in Berkshire suggests that this may be changing, although at the moment none of these sightings has been verified. It is unlikely that this will produce any increased risk for humans.

Where Do They Live?
Like most spiders, they can be found almost anywhere, but most commonly in garden sheds and garages, and usually come in after rain and at night.

What Can I Do About Them?
At PEST UK requests for spider control are most common in autumn and early winter. This is when the spider population peaks, and as the days shorten and the weather gets colder and wetter spiders and other insects venture inside for shelter and warmth.  Treatment for spiders is fairly straightforward – we apply a residual insecticide externally around windows and doors as well as inside on walls and ceilings concentrating on the wall/ﬂoor and wall/ceiling junctions.

Spiders serve a valuable purpose, and in most cases, if we leave them alone they will leave us alone.